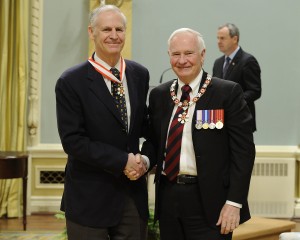 John Grace, lead of CMC’s Theme A research stream and UBC Chemical & Biological Engineering professor, was  invested as an Officer of the Order of Canada in a ceremony at Rideau Hall on Wednesday May 7, 2014. He is among 45 new recipients of the Order of Canada, 35 Members and 10 Officers. The honour was bestowed by His Excellency the Right Honourable David Johnston, Governor General of Canada.

The Order of Canada was created in 1967, during Canada’s centennial year. It is one of Canada’s highest civilian honours and recognises outstanding achievement, dedication to the community and service to the nation. Since its creation, more than 6,000 people from all sectors of society have been invested into the Order.

Dr. Grace’s award recognises his contributions as a chemical engineer, notably to the development of cleaner technology for industrial processes and energy production.

According to department head Dr. Peter Englezos, “John is an outstanding Canadian figure in chemical engineering and a world-renowned leader in the field of fluidization, chemical reaction engineering and clean energy. He has made remarkable contributions to the understanding and modelling of gas-solid fluidized beds through his roles as an educator, a researcher and an innovator. We are privileged and fortunate to have John as a colleague at UBC.”

“I am overwhelmed that my colleagues took the initiative to nominate me for this signal honour,” says Grace. “It is very special to be honoured by one’s country. So many students, colleagues and staff have helped me in my career and deserve much of the credit.”

Dr. Grace holds a Tier I Canada Research Chair in Clean Energy and is a co-founder of Membrane Reactor Technologies Ltd., a company focused on efficient hydrogen generation and use. He is a Fellow of the Royal Society of Canada, the Canadian Academy of Engineering, the Engineering Institute of Canada, and the Chemical Institute of Canada. He has also received a host of awards, including the Canadian Society for Chemical Engineering’s R.S. Jane Memorial Award, the Career Achievement Award of the Science Council of British Columbia, the American Institute of Chemical Engineers’ Thomas Baron Award and its Dupont Particle Technology Forum Award and the Meritorious Achievement Award of the Association of Professional Engineers & Geoscientist of BC.

Dr. Grace’s award of the Order of Canada was announced by His Excellency the Right Honourable David Johnston, Governor General of Canada, on June 28, 2013.