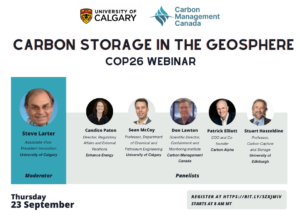 Carbon capture and storage (CCS) is an evolving and growing suite of technologies that has been used in one form or another for 50 years. More recently, the technology has gained prominence because of its critically important role for achieving climate change mitigation targets. While several of the technologies have been proven at commercial pilot scale, a large-scale CCS industry has not yet been developed. However, that situation is now rapidly changing with the emergence of both an expanding industrial and technology development base, enhanced investor and innovation community interest, and firmer government commitments to climate targets.

Join our six panelists on September 23 as they discuss current trends and possible future states for carbon capture and storage in the geosphere. We’ll examine the drive toward cluster collection, transport and storage systems, CCS as a business opportunity, explore the link between hydrogen production and CCS and also examine the present and likely future states of large-scale carbon dioxide removal systems.

Steve Larter is a Canada Research Chair and Professor of Petroleum Geology at the University of Calgary in the Department of Geosciences. Professor Larter is co-founder of numerous technology startup companies, including Gushor Inc. (now part of Schlumberger), and currently advises several university-based student, postdoctoral, and faculty startups. Steve is a Fellow of the Royal Society (FRS), a Fellow of the Royal Society of Canada (FRSC), a Fellow of the Geological Society (FGS) and a Foreign Member of the Norwegian Academy of Sciences and Arts (DNVA).

Candice is the Director for Regulatory Affairs & External Relations at Enhance Energy, a privately-owned Alberta-based energy development company reducing carbon emissions through CCS and CCUS. She has 15 years of experience in technology development and innovation in energy systems. Candice is passionate about energy technologies, environmental performance and impact in communities. She holds a B.Sc. in Mechanical Engineering and a M.Sc. in Chemical Engineering. She is registered as a Professional Engineer with APEGA and is a Fellow with the Energy Futures Lab. She has been recognized as a leading female innovator as part of the Alberta Chapter of SHEInnovates and as an energy industry influencer in the Young Women in Energy 2020 awards. She is a recognized thought leader in her community, volunteering with the Women in Leadership Calgary Chapter, Cybermentor, the Alberta Clean Technology Industry Alliance (ACTia), the Edmonton Ski Club, and the Technical Committee for the Global Energy Show.

Don Lawton is Scientific Director of the Containment and Monitoring Institute (CaMI) at Carbon Management Canada (CMC) and Professor Emeritus of Geophysics at the University of Calgary. He leads a research and commercialization program for verifying secure storage of CO2 in carbon capture and storage (CCS) projects. He was a co-recipient of an NSERC and Conference Board of Canada University/Industry Synergy Award in 2000, was awarded the Canadian Society of Exploration Geophysicists (CSEG) Medal in 2000 and received Honorary Membership in the Society in 2014.

Patrick Elliott is the COO and co-founder of Carbon Alpha, a private company focused on providing carbon sequestration as a service within the emerging Canadian CCS industry.  Prior to co-founding Carbon Alpha, he was the Executive Vice President and co-founder of Jupiter Resources, a private Calgary-based energy company, which grew to become the 9th largest natural gas producer in Canada. From 2007 to 2014, Patrick was Vice President of Business Development and a co-founder of Canbriam Energy. Since 2018 Patrick has been an Associate at Creative Destruction Lab – Rockies and is an Investment Advisor at UCeed Energy Transformation fund at the University of Calgary.  Patrick has been involved in developing, acquiring, and managing natural resource assets and teams for more than 27 years and is passionate about leadership, entrepreneurship and technology innovation.  He holds a B.Sc. (Hons) in Geology from the University of Western Ontario and is a Professional Geologist with APEGA.

Stuart Haszeldine is the current Director of the Scottish Carbon Capture and Storage group (SCCS) and the world’s first Professor of Carbon Capture and Storage (CCS). He is one of the key driving forces behind establishing CCS as a new industry in the UK, EU and worldwide. Stuart has over 35 years research experience in energy and environment; innovating new approaches to oil and gas extraction, radioactive waste disposal, carbon capture and storage, and biochar in soils. Stuart provides advice to both UK and Scottish governments. He was elected Fellow of the Royal Society of Edinburgh in 2002, awarded the Geological Society William Smith Medal in 2011 and in 2012 was appointed to the Order of the British Empire for services to climate change technologies. He is currently investigating grid-scale hydrogen storage, and valuing direct air capture, CCS, and nature-based solutions.