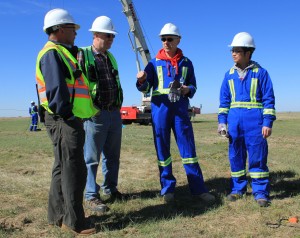 Geophysics professor Dave Eaton, University of Calgary, and a team of postdoctoral researchers and students spent three days at a field research station near Brooks this month learning how to install and operate a microseismic system capable of detecting tiny pressure fractures created by the injection of fluids, such as CO2, underground.

The SuperCable borehole monitoring system was acquired by the University of Calgary from ESG Solutions several years ago with funding from the Canada Foundation for Innovation, and it is the only such system in the world operated by a university. Data collected through the monitoring system can help ensure CO2 and other fluids, such as those used in fracking, are injected safely.

Learning how to use it themselves means Dave Eaton and his team have more research project options, and decreased operating costs.

“This represents our first actual training on the use of the downhole tool string. We contracted the manufacturer to instruct us how to install the equipment rather than subcontracting them to do the work as we have on previous occasions. This will give us the experience to more easily use the equipment elsewhere,” said Eaton.

The field research station, which is being developed in affiliation with the University of Calgary, will be used by researchers and technology developers to test measurement and monitoring equipment for carbon capture and storage. Data such as Eaton’s is being used to characterize the site prior to the injection of carbon dioxide. It’s also baseline data that can be used for continued monitoring once injection has begun.

One goal of the research station is to serve as a site where students from universities and college technical programs can train in the operation of measurement and monitoring technologies. Don Lawton, geoscience professor at the University of Calgary and director of CMC’s Containment and Monitoring Institute (CaMI), says Eaton’s project is a perfect example of how the site will be used.

“We were very pleased to host Dave and his crew because it demonstrates the value of this field research station as a site for training students and industry practitioners. We anticipate researchers and students from around the world will visit the site and gain valuable hand-on experience developing and learning to use novel technologies,” said Lawton. 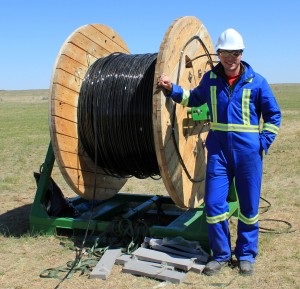 Mason MacKay, a first-year MSc student in geoscience, said the experience gave him an appreciation for the differences between industry and academic approaches to work.

“What stood out for me was talking to different students and researchers and finding out different perspectives,” said MacKay, who spent over a year working as a geophysical analyst for ESG Solutions before starting graduate work at the University of Calgary. “Here we are interested in testing broader concepts and answering broader questions. In industry you tend to focus on reaching one goal.”

The cable and geophone system is designed for long-term monitoring of microseismic events; in these passive operations the equipment is often left underground for weeks to record seismic waves from natural sources like earthquakes, or from artificial sources like fracking.

“We can use this downhole system to track the growth of hydraulic factures. Although that’s the main intended purpose of the equipment, it can equally be used for an active source, like the vertical seismic profiling we are doing at the field research station,” said Eaton.

At last week’s exercise, geophones secured in steel cylinders called sondes were attached to the SuperCable and lowered 500 metres into the wellbore. There they recorded vibrations created by an Envirovibe seismic source operated by the University of Calgary’s Consortium for Research in Elastic Wave Exploration Seismology (CREWES), a group co-led by Lawton.

In addition to deployment of the SuperCable by Eaton and his team, who are all members of the Microseismic Industry Consortium, staff and students from the CREWES project and from CaMI recorded surface seismic data with CaMI’s new Hawk nodal seismic recording system. The data provided by the vertical seismic profile method provides valuable depth control that is not possible using seismic data collected with geophones placed on the surface, and integrating the wellbore and surface seismic data can improve images of the reservoirs targeted for CO2 injection.

Eaton was looking at vertical seismic data to analyse two parameters: the velocity of the waves as they moved from the vibroseis source to the geophones in the wellbore, and the variation in the wave velocity (seismic anisotropy).

“Essentially, seismic waves go faster when travelling in the same direction as fractures within the rockmass. . . if waves propagate across the fractures, the wave speed is reduced,” said Eaton. The ability to characterize and map fractures is important for tracking fluids such as carbon dioxide that are injected and stored in underground sites.

Eaton anticipates conducting future experiments at the site once CO2 has been injected. If there are any changes to the rock near the injection site, the higher resolution of the vertical seismic profile (VSP) could be critical to detecting and analyzing geophysical signals.

“If the changes which are caused due to CO2 injection are very subtle, the additional resolution from the VSP could be critical for resolving the desired geophysical signature.”