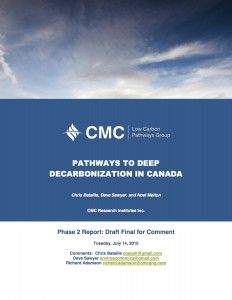 implemented today and scaled to deeper mitigation ambition in the longer term.

The Phase 2 report is part of the second stage of the Deep Decarbonization Pathways Project (DDPP) – a global initiative to explore ways countries can decarbonize their economies while maintaining economic prosperity. Participating in the project, being led by the United Nations Sustainable Development Solutions Network, are teams from 16 countries. CMC convened the team responsible for the Canadian section and is managing the process through its Low Carbon Pathways Group.

The first phase of the DDPP project, completed last year, produced an interim report for the Climate Leaders’ Summit in New York in September, 2014. Canada’s Phase 1 country report was released at that time.

To date, the DDPP has had a material impact on the United Nations Framework Convention on Climate Change 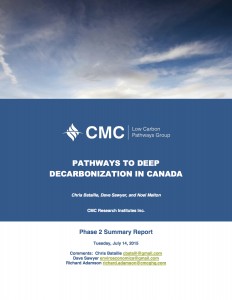 (UNFCCC) negotiations, most notably adding the deep decarbonization language and emission trajectories to mid-century into the UNFCCC negotiating process and the global climate policy discourse, culminating in the G7 announcement in June 2015 for Canada to decarbonize by 2100.

The Phase 2 report will be tabled by the French presidency at the UNFCCC’s 21st Conference of the Parties in December 2015.

Comments will be used to finalize the report. Input and feedback on the report should be directed to: