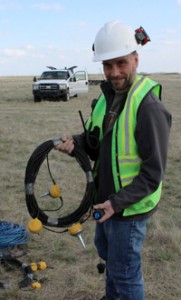 Reprinted from The PEG magazine, Fall edition, with permission from Association of Professional Engineers and Geoscientists of Alberta (APEGA)

More and more often, carbon dioxide and other fluids are being injected underground. Now, a new field station will allow researchers to track and monitor them in a controlled situation, with an emphasis on what happens near the surface.

In a remote field near Brooks, grasslands roll into a blue Alberta sky. Sure, the bucolic prairie scene is lovely to look at. But Dr. Don Lawton, P.Geoph., FGC, FEC (Hon.), is more interested in what happens below the surface — 300 to 700 metres below, actually. And the work he’s shepherding, as Director of the Containment and Monitoring Institute (CaMI), could soon have implications for the entire planet.

The three quarters of a section of land, about two hours southeast of Calgary, will soon be home to the Containment and Monitoring Institute’s (CaMI) new field research station. A first in Canada, the station is being developed by the University of Calgary and CMC Research Institutes, Inc. Working in real-world conditions, researchers in academia and industry will be able to develop and field test new technologies that track and monitor carbon dioxide and other fluids that have been injected underground.

Subsurface activities, including carbon storage, hydraulic fracturing, steam assisted gravity drainage (SAGD) and  cyclic steam stimulation, are under increasing scrutiny from regulators and the public. There is an urgent need to better understand potential containment risks in both natural and engineered systems, says Dr. Lawton, CaMI’s Director. “We need to improve monitoring technologies so that we can assure the public of fluid containment and conformance,” says Dr. Lawton, also a U of C professor of geophysics.

CMC is investing $4.4 million to get the station up and running, and has applied for another $5 million in grants
for further expansion. Considered a nonprofit business, CMC is connected to a global network of expert researchers. The organization is developing a series of institutes providing research and development services to clients that want to reduce industrial greenhouse gas emissions. CaMI is the first of these. A top priority is to move new carbon capture and storage (CCS) technologies from the laboratory to the field — and this will be a main area of research at the station.

Dr. Lawton points out that in recent years the Government of Alberta has invested $1.2 billion in CCS projects as part of its pledge to reduce greenhouse gas emissions. But the industry is young and there’s much to be done.

“There’s no difficulty with small scale fluid disposal. It’s been going on for years related to acid gas and waste water
disposal. But at a large scale we need to demonstrate, through advanced monitoring technologies, that we can prove beyond a reasonable doubt that the injection of CO2 is behaving as predicted and is going to stay in the reservoir,” he says. “The containment issue is probably the most important one for the public and those people living in areas where CCS projects will be undertaken in the future.”

Oil sands and shale gas companies will also benefit from the field research station, particularly those that inject steam and other fluids deep underground to aid in fossil fuel extraction through technologies like SAGD and hydraulic fracturing. But will these production techniques result in unexpected leakage of petroleum or other subsurface fluids into overlying rock formations, shallow aquifers, the ground surface or the atmosphere? Research undertaken at the station will develop monitoring technologies to investigate these concerns. It will seek solutions in areas such as

As sophisticated technologies for production move into the field, a more detailed understanding of what’s happening in the subsurface is required. For industry, a significant business driver is risk mitigation and risk management.

“We’re looking at all aspects of monitoring for injected fluids and containment issues in general,” says Dr. Lawton. “If we can come up with monitoring technologies that can be used during production to provide early warning that there is a containment issue, that would be of great value.”

OFF THE LAB BENCH AND INTO THE FIELD

Since it was founded in 2009, CMC has developed a $22-million portfolio of academic-led research projects looking at ways to reduce industrial greenhouse gas emissions. Its efforts are collaborative, linking more than 30 universities and research organizations from across and beyond Canada. But a big obstacle has persisted.

“The key issue is: How do we reduce barriers to get technology off the lab workbench and out into the field?” says CMC’s Managing Director Richard Adamson. “We identified the bottleneck as being cost-effectively managing uncertainty in that process. Real field work is needed to integrate, adapt, translate and prove new technologies so that industry and others can make appropriate choices about either investment or technical pathways.”

To address the challenge, CMC is looking to develop up to five research institutes — CaMI is the first. Others will be located in Alberta or across the country, focusing on other industry challenges.

“We are looking at prioritizing the first five institutes. CaMI is well along the way. The CO2 Capture and Conversion Institute is in the process of being formed. And the three that follow are still being prioritized,” says Mr. Adamson. “We’re building a very strong team that can manage and execute projects, drawing from our global network of discipline experts, to address specific challenges.”

As an independent facility where technologies can be developed, improved and transferred to practice, the field research station is unique in Canada. Other facilities are evaluating CO2 storage at depths greater than 2,000 metres, but CMC’s field research station will test technologies in the shallow subsurface. This will allow researchers to develop technologies to detect fugitive gases that may have escaped deeper containment reservoirs — before they research the surface. It’s also the only site globally that allows researchers to determine the detection threshold of gas-phase CO2 in the subsurface, to help in the development of early detection systems. (In deep storage sites, CO2 is in a liquid phase.)

The search for a perfect location for the field research station took about three years. Around a dozen sites were considered, but the property near Brooks ticked the right boxes.

Reasonably remote, it has no sensitive wildlife habitat, no other nearby industrial development or heavy truck traffic causing vibrations in the area, no power lines to interfere with rigs or other electromagnetic equipment, and no pipelines right-of-ways to contend with. Plus it has the geology suited for the project.

Mineral rights under the land and surface rights are both owned by Cenovus Energy Inc., which has provided CaMI with access to those rights for 10 years, with an option to extend for an another 10. In return, CaMI will provide Cenovus with access to new seismic and other data it collects at the site.

Local ranchers in the area were consulted prior to development and the feedback was positive. The County of Newell provided a letter of support.

Development of the station started in May with baseline seismic testing. About 1,400 sensors were set up over one square kilometre. High-resolution, 3-D seismic was completed for site design to help identify the best well placements. Baseline sampling of nearby groundwater aquifers and soil were undertaken this summer. Core samples have given researchers a full picture of the region’s geology. Cenovus released to CaMI its existing seismic data for the area.

“We’re accumulating a library of background data sets for the property that people can use in their research,” says Dr. Lawton.

In total, there will be two injection wells drilled onsite, at 300 metres and 700 metres, and at least four observation wells equipped with instrumentation arrays. Schlumberger Carbon Services has been contracted to drill wells and build the infrastructure station. The first injection well is scheduled to be drilled in late September and the second is expected to be in place by mid-2015.

For researchers, the station will be a one-of-a-kind opportunity to test technology in real-world,  shallow-zone operating conditions. “We can do lots of modelling and we can do lots of theoretical predictions, but we really need to be doing experiments in the field,” says Dr. Lawton.

“We need a field station to monitor for CO2 in the subsurface, particularly to look at how quickly we can detect it if it migrates out of zone. There are lots of technologies available to find CO2 in the soil and venting into the atmosphere, but by then it’s too late. We need to find any non-conformance earlier rather than later. So that was really the driver for setting up this station.”

It will take about two years for the station to be fully operational. Then, about 1,000 tonnes of CO2 will be injected into the wells annually, having been trucked to the site from local gas plants. The CO2 may also include small amounts of methane or other tracers. Injection targets are water-filled sandstones within the Upper Cretaceous clastic reservoir formation, with overlying shales or mixed sand and shale forming the cap rocks.

Injection will be on a very small scale when compared to industrial CCS projects like Shell Quest, which will inject more than one million tonnes of CO2 per year from its Scotford Upgrader. But even at the station’s scale, researchers will be able to monitor and evaluate the behaviour and migration of gas plumes, using novel monitoring instruments and techniques.

Within a couple years, CaMI hopes to produce its own CO2 onsite through a fuel cell — a green energy technology that will also produce clean heat and power for the site.

A trailer at the site will house research facilities. Mr. Adamson envisions that as a key part of making the site a technology
incubator.

“So having this space is really helpful for people who are trying to advance some of these novel approaches. They can do test programs under specific conditions so they can validate the performance of new technologies and provide independent performance verification,” says Mr. Adamson.

Currently, there are promising technologies at the bench scale that need to be moved into the field and tested to confirm they actually perform the way they’re supposed to over time and under different field conditions.

“We can work with them to advance those technologies, or we can work with industry to solve a specific problem. Say they’ve got an existing technology that almost works, but fails under certain circumstances or needs some refinement; we can also work on that end of it,” says Mr. Adamson.

In fact, CaMI hopes that partnerships with industry will help create a revenue stream to support the site and keep it running. Companies could use the site for hands-on testing of their own technologies, or subscribe to see the results of a large range of containment and monitoring experiments.

“We’re talking to industry right now. There’s interest, but there are no cheques yet. Once we’re beyond the build phase, we’ll start getting subscribers,” says Dr. Lawton. There’s also been interest from CCS and containment research groups from around the world. “Our goals are international,” he says.

In addition, a hands-on field school is part of the project. CaMI will work with the U of C and other partners to develop training programs on site for graduate and undergraduate students.Commercial training can also be provided for industry scientists, technologists, Professional Geoscientists and Professional Engineers.

Public outreach and transparency is also a priority.

“People can come and visit and understand what goes on in terms of fluid injection and monitoring,” says Dr. Lawton. “There’s a lot of public concern about injections. The best way to demonstrate to the public how we can monitor and ensure the safety of these programs is by showing people our site.”