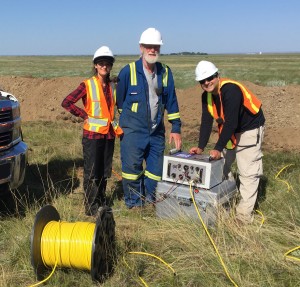 CALGARY, AB — Shell Global Solutions has signed an agreement to sponsor the research program at the Containment and Monitoring Institute’s Field Research Station.

The agreement will see Shell contribute $50,000 a year for up to four years to support work at the field station, a site where measurement and monitoring technologies for carbon storage are tested. As a sponsor, Shell will have the opportunity to prioritize research opportunities, bring forward new research directions, and provide guidance on the overall research program. The company will also have a seat on the Research Steering Committee, to be convened after the build phase of the Field Research Station (FRS).

“The work done at the Field Research Station fits very well into Shell’s Storage and Containment Technologies Program, specifically the mandate of the Storage and Containment Technologies Program Unit. The focus is on the development of effective and efficient containment and environmental monitoring technologies for CCS and other hydrocarbon activities with potential integrity issues,” says Stephen Velthuizen, External Relations Manager for Shell’s Quest Carbon Capture and Storage Project.

Shell is involved in two commercial-scale carbon capture and storage (CCS) projects – one in Canada and one in Australia. At its Scotford Upgrader facility in central Alberta, Shell operates the Quest Carbon Capture and Storage Project. The demonstration plant recently announced it successfully captured and stored one million tonnes of CO2 in its first year of operation. That figure represents about 1/3 of the emissions from the upgrader. Shell also has a 25% interest in the Gorgon Carbon Dioxide Injection Project in Australia. At Gorgon, scheduled to begin operating in 2017, CO2 will be captured at a gas processing facility on Barrow Island and injected in a deep-saline formation.

“We welcome Shell’s involvement in the Field Research Station,” says Don Lawton, Director of the Containment and Monitoring Institute and Professor of Geophysics at the University of Calgary “Shell recognized early the value of CCS as a way to reduce carbon emissions in the oil and gas sector and we will benefit from the work they’ve done at Quest. At the same time we will, through the FRS research program, be able to help Shell establish standards and protocols for monitoring the safe storage of CO2 underground.”

Velthuizen notes that research results from the FRS will may help optimize monitoring and measurement at Quest and will also provide an opportunity to learn about closure processes at CCS sites.

The FRS is Canada’s first facility dedicated to the research and development of a broad range of technologies for monitoring carbon dioxide and other fluids injected and stored underground. The site, located in southern Alberta, will allow researchers and technology developers to test and calibrate many different types of monitoring technologies in order to quantify the detection threshold of CO2 at intermediate depths (300 m in this case).

Research at the field station can also be applied to other sectors in the oil and gas industry such as the steam-driven, in-situ oil sands industry to ensure underground steam chamber containment, the shale gas industry to monitor hydraulic fracturing (including fugitive methane migration and potential methane contamination of groundwater), and in other applications such as the subsurface disposal of process water and acid gas.

As a sponsor, Shell joins a growing list of sponsors and international researchers working at the site. In December 2015, engineering, geoscience and environmental consulting firm Klohn Crippen Berger became the site’s first sponsor. The FRS is also playing host to researchers from across Canada, the U.K., Germany, and from Lawrence Berkeley National Laboratory in the U.S. Technologies currently situated at the site include broadband seismometers, a seismic array, an electrical resistivity tomography array, fibre optic cables for acoustic and temperature sensing as well as distributed heat pulsing, down hole equipment for seismic crosswell surveys, and a U-tube system for sampling fluids from the injection reservoir.

Shell Global Solutions (SCS) provides technical services and licensed technologies. What sets SCS apart from some other licensors and consultants is the knowledge gained from Shell’s corporate heritage as the owner and operator of large, complex industrial process plants. Shell’s technologies and business solutions reflect its many years of experience in designing, building and operating such facilities.