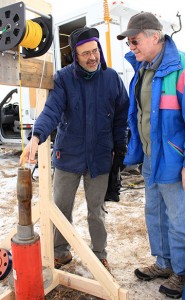 Peter Wild (left) and Don Lawton at the test site.

“These are very preliminary results under very controlled conditions, but none-the-less they are successful,” said Wild, from the test site located on University of Calgary land located near Priddis, AB.

For the test, water was pumped into a well that had been drilled at the site by staff with the Consortium for Research in Elastic Wave Exploration Seismology (CREWES).  A narrow stainless steel tube was then lowered to a depth of 120 ft. and a slow stream of nitrogen was released through the tube. Two sensors, comprising vertical and horizontal optical fibers, just 125 microns thick at their tips, were lowered to a depth of 80 ft. to detect the presence or absence of nitrogen bubbles as they floated past the sensor by measuring the refractive index of the nitrogen. Data from the two fiber-optic sensors was fed to a computer on-site where readings were observed in real time.

“We are using nitrogen as a proxy for CO2 in these tests. We have other sensors that we’ve been developing that are able to detect the concentration of CO2 in the water,” says Wild. Ultimately, Wild would like to test both sensors using CO2 in order to simulate leakage of CO2 from a storage site into an observation well.

Fiber-optic sensors are used by industry in a number of other applications including the detection of pressure and temperature in down hole measurement in oil wells, in hydrophones for seismic and sonar applications, and in fiber optic gyroscopes. But, says Wild, this is the first time they’ve been applied to the detection of fugitive CO2. Wild received CMC Round 2 funding to work on the project in 2010.

His eventual aim is to see his technology commercialized and used at large-scale carbon capture and storage sites. Wild is one of a growing number of researchers developing and improving the measurement, monitoring and verification technologies that will help make carbon storage safer and more secure.

Both Wild and Burton were pleased when their sensors performed better in the field than they did in the lab.

Sensors performed well in the field

“In the lab we were experimenting with different orientations of the sensors and were getting decent results. When we came out here, the sensor worked better than in the lab,” said Burton, explaining that as the experiment progressed, the readings from the sensor became more consistent and steady over time.

Another result of the field test is that Wild will be better able to prepare for his subsequent visit next summer.  At that time, he’ll be testing his sensors in the observations wells located at CMC’s new Field Research Station (FRS), currently being constructed 20 kilometres southwest of Brooks, AB. The FRS will be open to clients and academic researchers by mid-2015.

“It’s helpful to get hands-on experience so when we come back for the next round of tests. We’ll be familiar with the field situation and be ready for a more challenging test for our sensors.”

NOTE: For more information about operations at the Field Research Station contact Don Lawton at Don.Lawton@cmcghg.com or Kirk Osadetz at Kirk.Osadetz@cmcghg.com