First-of-its-kind permanent, continuous system for monitoring CO2 storage to be installed and tested at new facility in western Canada

The Lawrence Berkeley National Laboratory in California, which has conducted initial field tests on GPUSA’s system, will work in collaboration with CaMI and University of Calgary researchers to process the seismic data.

“CaMI enables the testing of this new technology, which is exactly what the field research station was designed to do,” says Don Lawton, CaMI’s director and professor of geoscience at the University of Calgary.

“A lot of what we’re developing and learning at the FRS is directly applicable to Alberta’s oilsands, including this new monitoring system,” he says.

After testing is completed, the permanently installed system will remain at the field station, where it will be used to monitor carbon dioxide injected underground into a geological formation. The facility began injecting CO2 at the site in October this year.

The Field Research Station, operated with funding from the University of Calgary, is designed to play a pivotal role advancing the commercialization of carbon storage and helping industry better understand the movement of fluids underground.

“There couldn’t have been a better site for us than the FRS to test our system. It had everything we’re looking for,” says Jim Andersen, founder and CEO of GPUSA, and lead on the project.
The U.S. Department of Energy’s National Energy Technology Laboratory last fall awarded GPUSA US$683,699 toward field validation of the company’s system.

Andersen says permanently installed, continuous seismic monitoring is needed for safe and cost-effective geological sequestration of carbon dioxide. GPUSA’s technology is designed to track and quantify the injected CO2 plume in the geological formation, and detect any migration through the overlying cap rock into shallower aquifers, or potential release at the surface.

The source that generates the seismic wave needs to be permanent, “because you want to be checking, if not once an hour, at least once a day to make sure nothing is shifting,” he says. “If you had to bring in equipment every day to do this, it would be impractical.” For example, constantly deploying large vibroseis or ‘thumper’ trucks, which have a vehicle-mounted ground impact system to generate a seismic wave, is prohibitively expensive.

“The beauty of a permanent source is that it stays in one location. Every time you use it there’s no variation in where it is, and the output is constant,” Andersen says. “It gives you a better picture.” 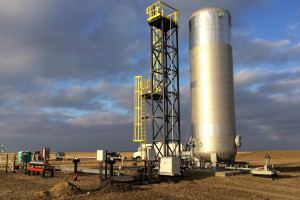 Lawton says the technology developed by GPUSA can monitor any sort of activity in the subsurface, so it also has potential application in Alberta’s oil sands industry.

Seismic monitoring is now used in steam assisted gravity drainage (SAGD) operations, which inject pressurized steam into the reservoir to heat and soften the bitumen so it can flow to wells and be pumped to the surface. The seismic surveys tell operators where the constantly changing steam chamber is in relation to the bitumen deposit.

However, these surveys are done on a “time-lapse” basis, typically every six months to once a year. During the time between the surveys, the steam chamber can shift and other changes can occur in the reservoir.

“Operators don’t really know what has happened in between surveys,” Lawton says, but with permanent, continuous reservoir surveillance, “you get immediate information about what’s happening in the subsurface.” SAGD operators would be able to quickly investigate sudden changes in the reservoir and make operational changes if necessary.

GPUSA’s technology is an example of the trend in continuous reservoir surveillance using advanced geophysical monitoring that collects and manages huge amounts of data, Lawton says.

For example, the Field Research Station is equipped with fibre optic-based geophysical sensors instead of large arrays of seismic geophones. The advanced sensors, which will be used in conjunction with GPUSA’s technology, are much easier and less expensive to install in wellbores at the site.

It would be difficult to test GPUSA’s permanent system at an actual SAGD plant, where the complex bitumen-production environment doesn’t lend itself to field research, Lawton says.
The Field Research Station, on the other hand, provides a unique, independent, controlled environment in which to do a proof of concept of new technologies.

“The field station is a critical step between numerically modelling or benchtop experiments and a full-scale field pilot or a commercial-scale pilot,” Lawton says.

The tests of GPUSA’s technology will be integrated with Lawrence Berkeley National Laboratory’s (LBNL) fibre optic sensors and the conventional downhole seismic receiver array already installed at the CaMI site.

“We’re very happy to be collaborating with CaMI, and to see GPUSA work towards commercialization of a permanent source technology that builds on earlier research efforts, including LBNL’s,” says Thomas Daley, head of geophysics and staff scientist in LBNL’s Earth Sciences Division.

“Sites like CaMI’s Field Research Station, designed to test and demonstrate subsurface monitoring technology, are very important to advancing monitoring science. We at Berkeley Lab are using the FRS to develop and test our own technologies in electromagnetic imaging and fiber optic sensing,” Daley says.

There are other commercially available seismic source technologies that can be placed downhole in wells. However, those sources, such as piezo-type devices, don’t generate a powerful enough wave to produce seismic images at sufficient depths, says Andersen, who used to build sonar equipment for the U.S. Navy.

“We had to modify our system a little bit for what we needed to do, but the basic parts are made by the construction industry,” Andersen says.

“We want to make our system readily available at the right bandwidth, power level, size and cost, so it can be widely adopted by industry,” Andersen says.

The fully automated wireless system is remotely accessible via the internet. Lawton, for example, could log in remotely any time from his Calgary office to run the system and check the CO2 plume in the reservoir at the CaMI site.

“When the tests are finished, we hope the researchers at the FRS get good use out of the system,” Andersen says.

*Mark Lowey is a professional journalist and science writer based in Calgary and managing editor of EnviroLine.