Not visible in CMC theme 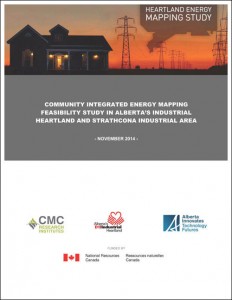 The recently-completed Community Integrated Energy Mapping Feasibility Study was the first of its type in Canada. It obtained data from 16 industrial companies in the Strathcona County and the Heartland industrial areas near Edmonton to understand the energy flows and associated waste energy within the region.

The study revealed a significant amount of waste heat exists in the Strathcona and Heartland industrial areas. For each heat island, assuming that 33% of this total available waste energy could be captured and repurposed, the resulting 97 MW of waste energy could theoretically be used to:

To read the media release that accompanied the report release click here. 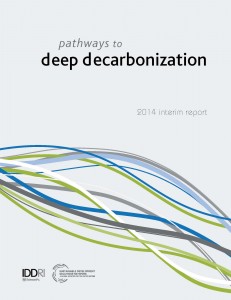 Carbon Management Canada has joined with national teams of experts from around the world to imagine then model a future where countries have achieved deep decarbonization while remaining prosperous. Led by the Sustainable Development Solutions Network, a global initiative for the United Nations, and supported by the Institute for Sustainable Development and International Relations (IDDRI) in France, the International Energy Agency, and the World Business Counsel for Sustainable Development, fifteen countries and over 34 organizations worldwide are working to develop such scenarios from the bottom up, nation by nation.

The Deep Decarbonization Pathways Project interim report was released on July 8, 2014 to UN Secretary-General Ban Ki-Moon in preparation for deliberations at the UN Climate Summit in September 2014. The report is the first global cooperative program to identify practical pathways to a low-carbon economy by 2050. The chapter on Canada was written by Navius Research with support from Carbon Management Canada.

The interim report highlights the importance of investing in and developing low carbon technologies and it shows that decarbonization and economic prosperity are not mutually exclusive. Research teams from 15 countries are participating in DDPP – 12 of those teams submitted chapters for the interim report. Although countries have several options to achieve deep decarbonization, there are three common pillars that run through the report as being essential to the decarbonization of energy systems:

To read the media release that accompanied the report release click here.

To accomplish these goals, the DDPP team proposes a coordinated international modeling effort in which research teams from 15 countries analyze what their nations must do to achieve an emissions trajectory consistent with the 2°C target.

These decarbonization pathways will:

Carbon Management Canada is actively seeking funding from industry and government sources alike to support this important ongoing project.  If you are interested in receiving a more detailed briefing or discussing this further, contact:
Richard Adamson at Richard.Adamson@cmcghg.com

UN issued with roadmap on how to avoid climate catastrophe
The Guardian – July 8, 2014

CMC Research Institutes is supported by
the Government of Alberta.